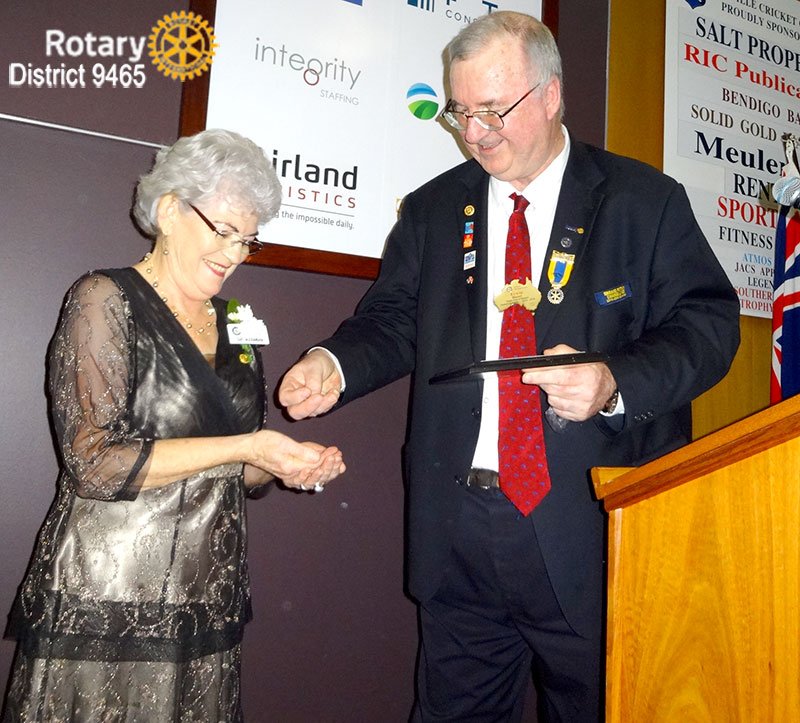 The Rotarian Spouse/Partner Service Award recognizes spouses
and partners of Rotarians who have demonstrated exemplary
humanitarian service through Rotary.

Only up to 100 awards are issued annually by Rotary International.
Recipients will be selected by an officer appointed by the RI
president.

Candidates will be considered based solely on the humanitarian service they have rendered through Rotary,  with an emphasis on personal volunteer efforts and active involvement in helping others.

An individual may receive the award only once.

Sue is married to Ron Alexander of the Ascot Rotary Club.

As a nurse midwife, Sue has always had a strong desire for caring and a passion for immunisation of children to keep them disease free and healthy. With this in mind, Sue joined a Rotary Team to visit India on a rapid 5- day trip during 2008 for a National Immunisation Day where she sat in a small open Indian Temple for many hours of pouring rain and in very wet socks, vaccinating many impoverished Indian children.

Sue had won a national nursing award for Immunisation Best Practices during 2009, choosing not to spend the $5000 award on herself but to travel to a remote mountain location in Timor Leste to work during her annual leave of three weeks.

What she found at the end of long flights and a rugged treacherous 3 hour road trip was a very basic medical clinic and accommodation complete with meals cooked outside over an open fire, electricity available for only 6 hours late evening, a scarce water supply and cold showers when water available.

The clinic proved an amazing experience that tested Sue’s nursing experience, resilience and ability to adapt to caring for very ill people with the minimum of medical equipment.

On occasions Sue managed life threatening illnesses without a doctor and relying on an interpreter.

Sue returned independently during 2010, 2011, twice during 2012 and again late 2013 to the remote village of Eraulo of subsistence people who make up the clinic catchment population of 8000.

The community has inherent health burdens of impoverishment, lack of education, lack of water, lack of sanitation, malnutrition, and high maternal and infant morbidity and mortality rates and preventable diseases such as ,gastro-enteritis, tuberculosis, malaria and common childhood diseases.

With encouragement from her Rotarian husband and family to continue her mission and then through the Rotary Club of Ascot, Sue successfully achieved three Rotary Grants to help in her venture to improve facilities and equipment in the clinic.

With two District Simplified Grants and a Foundation Grant Sue
has obtained quotes, purchased and organised transport, even
purchasing the Infant Warmer from Vietnam, which is no small
feat.

Equipment that Sue has purchased includes a medical trolley,
paediatric oxygen, resuscitation equipment, examination light and
the Infant Radiant Warmer all for the birth room. A second exam
light, adult oxygen equipment, a pulse oximeter, an auroscope/
ophthalmoscope have found plenty of use in the treatment room
along with new storage units, now organised and labelled by
Sue on her visits which not only helps her but the nurse, health
workers and other volunteer nurses or doctors who visit and who
the clinic is reliant upon for much needed support.

Sue obtained a second hand ECG machine from a Perth medical
practice and despite it’s heaviness, carried it by hand to East Timor.
Sue spent months negotiating with a maternity hospital in Darwin
and then with its Health Department for release of a good quality
‘excess to requirement’ birth-bed to replace the ancient rusted
model. This birth bed arrived during her 2012 visit so Sue was able
to help assemble and offer education on its use and maintenance.
Offering general nursing education to the health workers on
topics like infection .control, instrument care and sterilising, basic
wound care and even English, all done with the help of one health
worker as an interpreter has been an integral role undertaken on
these annual visits to improve local skills and independence.

Sue has seen and managed many medical diseases and
emergencies, not encountered routinely in Australia and spent
long demanding days but has never faltered in her desire to help
the clinic.

During her 2011 visit Sue sat down with the Community leader
and village elders to discuss a possible Rotary -aided water project and then from a hot humid Dili hotel on her last night she sat down and penned a proposal to the RC of Ascot. That proposal was not just accepted but the project completed and a second water project is in its final stages to give the gift of water to very many villagers.

This has all happened because of Sue’s humanitarian contributions to her beloved Timorese community.

Sue is a most worthy recipient of The Rotarian Spouse/ Partner Service Award and the first recipient of this citation in D9465.

She will join a distinguished list of previous recipients on the Rotary International register of awardees.