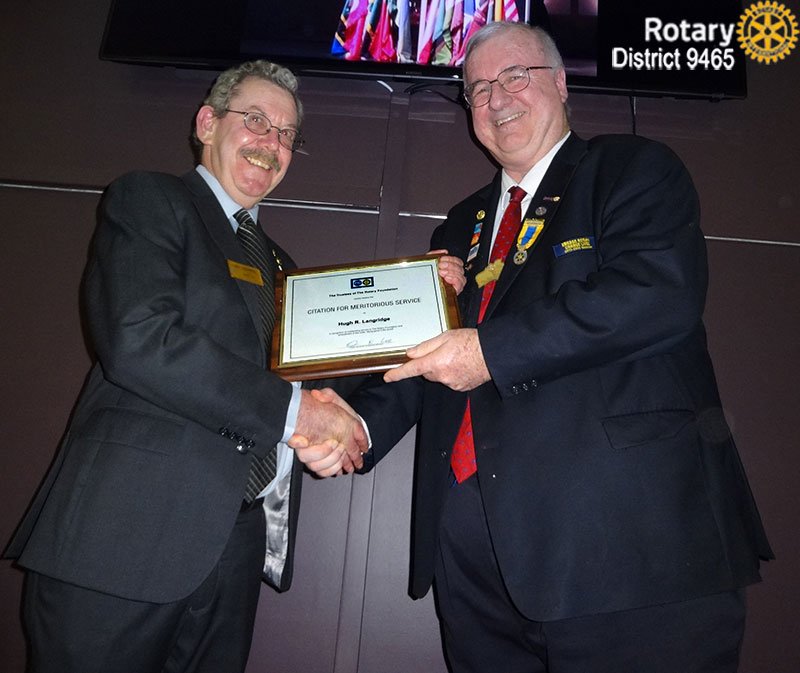 The Citation for Meritorious Service recognizes individual
Rotarians who have demonstrated outstanding active service to
The Rotary Foundation for more than one year.

Examples of eligible service include, but are not limited to:
• Service on Foundation committees at the club, district, or
international level
• Participation in Foundation grants or programs
• Support of Ambassadorial Scholars, Rotary Peace Fellows, GSE
teams, or Vocational Training Teams

Financial contributions to the Foundation, however notable, are
not relevant considerations for this award.

Hugh has formed a vital part of the District Foundation committee for 2013-14 as Grants Chair.

This role has required a focus on completing the reporting on outstanding grants from the old system and assisting in the implementation of the future vision grants model introduced on the 1st July 2013.

For the district to remain eligible for grants during 2013-14 it fell to Hugh to work with clubs and ensure
reporting of matching grants was completed to the satisfaction of Rotary International.

Hugh spent countless hours working with Rotary International Staff and Clubs to ensure reports were
appropriate and on time. The District remained eligible for grants at all times due to his efforts.

He brought his considerable experience to the fore to achieve the required deadlines on both the new and
old grants models.

He is called Mr Grants for good reason.

Hugh is a most worthy recipient of The Rotary Foundation Citation for Meritorious Service and the first
recipient of this citation in D9465.

He will join a distinguished list of previous recipients on the Rotary International register of awardees.

Hugh has served on the foundation committee over several years in the following roles:

Hugh has also been very active at district level over several years
in roles other than foundation including:

Hugh served as in several roles at club level including: