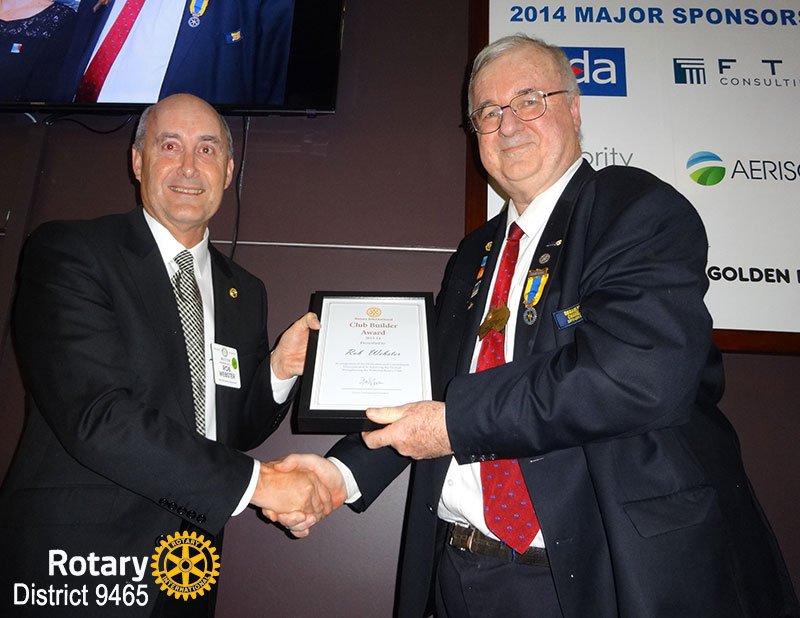 The Club Builder Award recognizes Rotarians who have made a
significant impact in supporting and strengthening their Rotary
clubs.

The nominee must be an active Rotarian in good standing, with at
least five years of membership.

Candidates must have done the following:
• Recruited at least five members who are active Rotarians at
the time of nomination
• Participated in Rotary training in their club
• Participated in at least one meaningful club-level vocational
service project
• Attended at least two district meetings in the three years
immediately preceding nomination.

Eligible candidates must be recommended by three past presidents of their own club.

Past President Rob Webster is a Rotarian who has given long and
distinguished service This began when he joined the Rotary Club
of Scarborough in 1983. In the following 24 years he served with
distinction in many Club & District roles including Secretary and
President, Chair of the District 9450 Youth Exchange Committee
and Chair of the District 9450 Conference Committee. As a
consequence of these activities he was not only awarded a Paul
Harris Fellow but also two sapphires.

In 2007 Rob transferred to the Rotary Club of Willetton and continued his Club building ways by being actively involved in numerous Club activities including the Club’s Annual Community Fair plus the roles of Director International Service, President, Assistant Governor and in 2012/2013 Membership Director. In this
last role Rob was instrumental in recruiting, inducting and training nine new members, five of whom were females. All but one (who left due to employment pressures) are still members. In addition while President in 2010/2011, Rob was the instigator in the Willetton region of the very successful Vocational Service Project, Microscopes in Schools. He also represented the Club at the District Conference in 2011 and also attended the Busselton conference in 2013.

Not content with his many achievements, in 2013/2014 Rob willingly stepped up to Chair the District Conference Committee. He led the committee with distinction and brought his considerable managerial and psychological skills to bear to mould Club members into a very effective effective team who in turn produced an outstanding event.

Rob’s dedication to Rotary and his unassuming but very effective style and presence have contributed in a most significant way to the Rotary cause and through that to building two Clubs the most recent being the Rotary Club of Willetton. He is therefore a very deserving winner of the Club Builder Award.