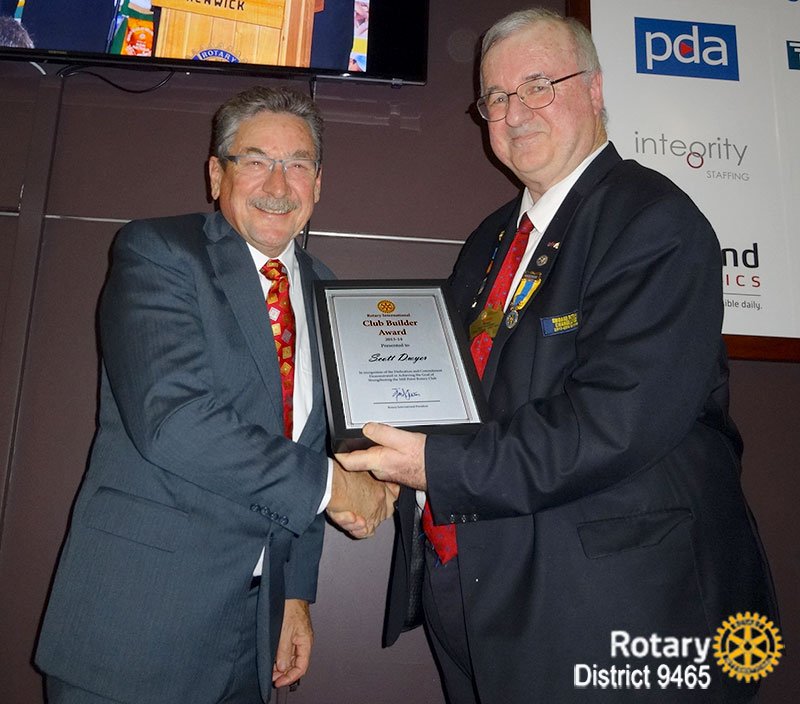 The Club Builder Award recognizes Rotarians who have made a
significant impact in supporting and strengthening their Rotary
clubs.

The nominee must be an active Rotarian in good standing, with at
least five years of membership.

Candidates must have done the following:
• Recruited at least five members who are active Rotarians at
the time of nomination
• Participated in Rotary training in their club
• Participated in at least one meaningful club-level vocational
service project
• Attended at least two district meetings in the three years
immediately preceding nomination.

Eligible candidates must be recommended by three past presidents of their own club.

He served as President in 2011/12 and is a Paul Harris Fellow. Scott has roles on all of the clubs committees, including Director of the Rotary Ramble and is currently assistant Treasurer.

Scott has nominated 11 new members in total. Scott continues to work with members on leave of absence to encourage them to attend social events and hopefully encourage him back into the club.

Scott attended the Club Visioning Workshop held by our club 1 December 2013. As a past president of Mill Point, he attended the necessary training to ensure he was prepared for his year of presidency.

Vocational Service Project – In Scott’s Presidential year a new award was introduced to the club. This is the ‘Unsung Hero’ Award. All service clubs, and not for profit groups in the City of South Perth are contacted and asked to nominate a volunteer who goes above and beyond. Every year the successful recipient receives a plaque to honour their volunteering commitments, and is given $500 towards a charity of their choice.  In 2013 Scott and his wife Robynne attended a half day visit to a working farm in Perenjori to learn about biodiversity and the challenges of farming practices in extreme environments.